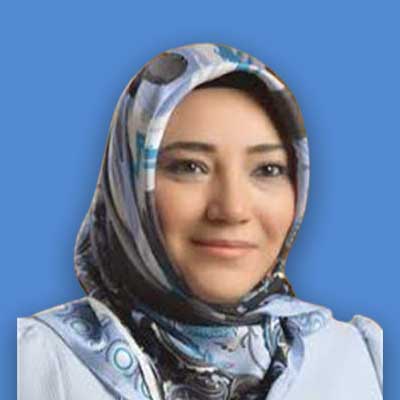 Zeynep Alkış was born in Siirt in 1978. She completed her secondary education in Diyarbakır İmam Hatip High School and graduated from Anadolu University Theology Program. Alkış also received her bachelor's degree in Law at the International University of STRUGA. She was the founding member and chairman of the Ak Parti Mardin Provincial Women's Branch for three terms, the Deputy Head of the AK Party Headquarters of the Women's Branch and the Head of human rights. At the 2nd Grand Congress of the AK Party, Alkış was elected as a member of the Central Decision and Executive Board (MKYK). Her book title “Our Side Brotherhood" (Tarafımız Kardeşlik) was published in 2017. She is founding member of the Southeastern Women's Platform (Güneydoğu Kadın Platformu) and the founder Chairman of the Association for Prevention and Evaluation of Women's Potential in Töre Murders (Töre Cinayetlerini Önleme ve Kadın Potansiyelini Değerlendirme Derneği-TÖRKAD), and is also the founder of the Leader Women's Platform.

As a human rights activist and a writer, she conducted public opinion surveys on the subject of Töre Murders (honour killing), and organized numerous conferences and panels. She carried out field research on women studies in the southeast and eastern Anatolia region. Alkış has also developed social projects about Syrian asylum seekers in Turkey and has taken an active part in social integration projects for Syrian women and their families. She was the coordinator of the “Syria Report” prepared by the Leader Women's platform and TÖRKAD.

She has also participated in many local and international women-oriented activities such as the UN Women Friendly Cities Mardin programme and UETD Germany.